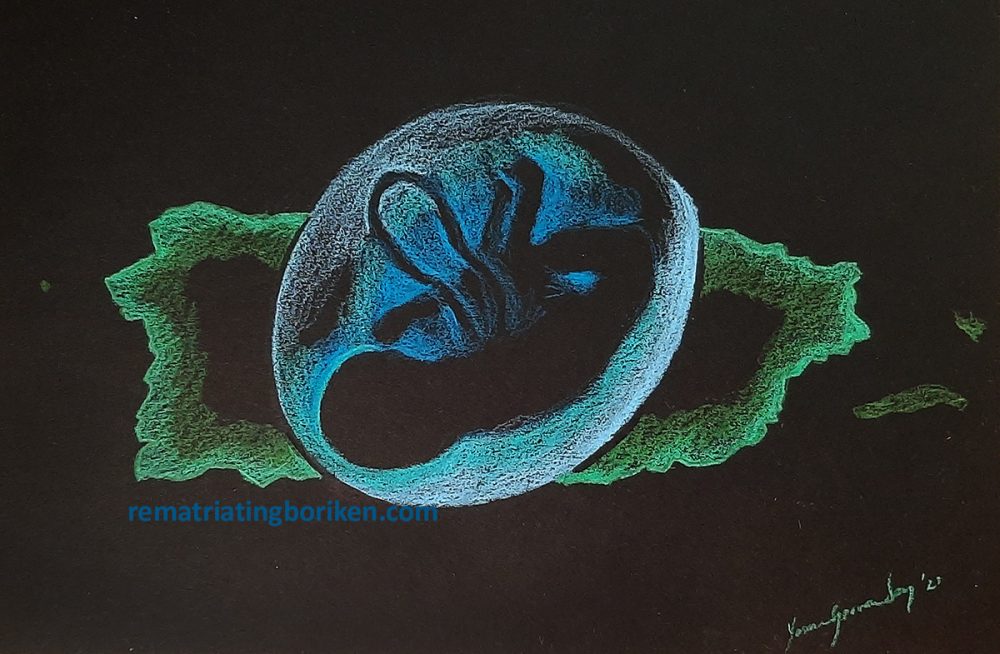 Perhaps the title of this post is misleading. Rematriation hasn’t yet been a widely discussed topic as related to Borikén. This is a revisiting of the term to lift/ open/ deepen/ broaden/ promote a necessary dialogue on what Rematriation means for Borikén and her sister islands.

The entity that two empires have called Puerto Rico is in crisis. A perpetual colonial crisis specifically designed to bring Pedro Albizu Campos’ prophecy to life. The US wants the birdcage, but not the bird. We have been miseducated to view all through a US lens, covet colonizer amenities. The colonizer continues its campaigns denouncing our homelands as uninhabitable, while simultaneously coveting our lands, buying up the schools they closed and our national landmarks to develop them into hotels. The rusting centrales spread across the island stand as deteriorating testament to the colonial destruction of our economy. Transformed from a diverse agricultural economy to a single colonial cash crop later abandoned. Colony held captive mostly consuming costly cabotage food imports. It is hard. It is real. It can be a nightmare to her children. But it continues as colonial playground to the colonizer. It is a crisis. A spinning wheel. The more we fear our homeland and deem it unlivable, the more we flee, stay away, the more space we leave for settlers. Many say we cannot sustain ourselves here, yet many of us are not able to sustain ourselves stateside either. Why aren’t we talking more about this?

Mainstream media focuses on the hoards of people that have flown the coop throughout the twentieth century, and from the 2008 fiscal crisis to the 2017 hurricane season. There is little focus on those returning. This brings us back to rematriation. What does that mean? What is the return?

Rematriation was never meant to be a vacation. It is hard work. It is sacrifice, growth: rebirth. Since my 2014 rematriation, the land has revealed herself as the womb. Though born and raised in Brooklyn, this is my womb. She held my mother and all my grandmothers. My maternal abuelas were midwives. Perhaps their ancestral wisdom whispered this knowing into my blood. I returned. Even when my mother was taken from here at the age of one, by her own mother, the egg that would be a future me was already in my mother’s womb. That egg was planted when my mother was developing in my abuela’s womb in Ponce. I returned to my ancestral womb. My mother returned to her womb. Borikén is that womb.

Rematriation as defined by First Nation people of Turtle Island, is a return to the sacred mother, the sacred ancestral lands, imbuing the land once again with the sacred elements that conquest attempted to rob from it.

The return to Borikén is the return to the sacred womb. The return to the ancestral homeland. The honoring of the sacred land. It is taking up our rightful place and space after being evicted by colonialism, only to be evicted stateside again. It is searching deep within for all the ways we were taught to fear this place, fear our own selves. All the ways they preach God in their image and have us measuring the success of our homeland by how well it mimics the colonizer and his ways.

Every rematriation journey however needs to be tailored to one’s own spirit journey. Some arrive to return to the land, work the land towards food sovereignty. Some arrive to raise our ancestral healing traditions and contribute to the collective healing of our people. Some arrive to preserve, celebrate and spread our ancestral traditions. Some arrive to directly fight the empire. But every way in which we preserve these lands, these traditions, our own selves, through genocide, through conquest and continued colonialism, contributes to the decolonial process. Rematriation is a liberatory process. It is dissolving the colonial relationship, eliminating the empire and its influence. Unlearning the miseducation of self-loath. Undoing the erasure of our ancestral legacies. It is embracing and celebrating our authentic essence. It is untying the rope of the oppressor to embrace our greater Caribbean essence of Indigenous and African Diasporas. And it is a process that can happen wherever the children of these lands and their Diasporas find themselves. It is not a matter of packing your maletas and moving overnight. Nor is it a matter to be ignored and omitted from decolonial discussions. It ain’t gotta be you right now or ever, but perhaps you can support someone in their return. Rematriation is a crucial part of an unfolding liberation process, practice, and praxis.

"En lo que estamos ocupados mirando hacia un Don Pedro, una Lolita, un Filiberto y un Betances, elles nos devuelven la mirada, esperando a ver que haremos para liberarnos de todo esto."
Breaking my social media fast for a different september 12 post.
Un regalo inolvidable... este cumple la tierra me pidio observarla, estudiarla con ojos ancestrales...desde el agua. Llevo años soñando con esta esquina de esta isla, de estas aguas. He llegado de nuevo (y nueva). Algo inexplicable.
A different birthday. 46 revolutions around the sun. 9 months-post eye surgery. To say ive been reborn would be an understatement. Much has changed. How I see with my eyes and spirit has forever been changed. I feel different. Am called to do things differently. I was called into this birth month like my ancestors, off line, off the phone, laying low. In silence and having silenced the external chatter. It gets weird sharing your age after a point, but the greatest gift is knowing and owning that I'm too grown for certain shit. Called to move as I'm meant to, not how others expect me to. Moving deliberately, yet flowing to a universal pulse. This humanity brings trifling times in this Earth life but Ive met phenomenal people, spirits, along the way. They are reminders of the many things we have to be grateful for. Grateful to all collaborators on this love and liberation mission... grateful to this sun and to the moon, about to be full like it was the night I was born, shortly after midnight (I might be a werewolf)...
Lolita siempre!
Lifting my inner lil Yaz and big Yaz at the opening of my birth month! I owe my world to this little girl for dreaming big and finding beauty and light in all things, even some scary things.